Now and Then Again 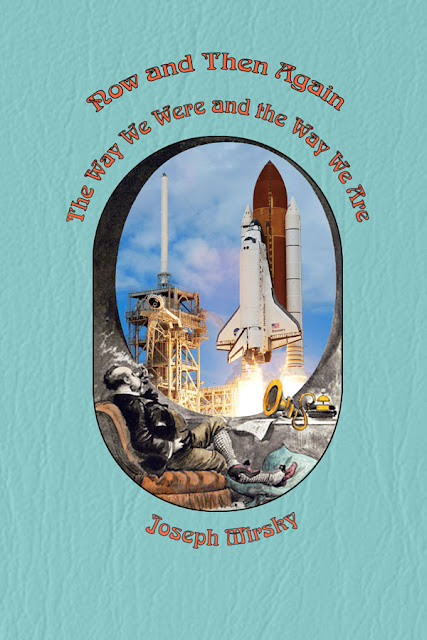 I own a jewelry store in Pompton Lakes, N.J. I send newsletters to my customers 3 times a year, 56 four page 8½ x 11 newsletters. The newsletters were an instant hit when I started them in 1997. .I compiled them along with many articles on topics unsuitable for the newsletters into three editions of the book of the newsletters,Ornamentally Incorrect, plus articles written just for the book. At this point I have written so many articles about just about everything, I reorganized the material into a new general interest book, Now and Then Again, with jewelry articles pared and put in one section. Included are articles too long or too edgy for the newsletters.

The articles are wide-ranging, about consumer and middle class issues, food, drink, money, economics, politics, and the lighter side of life. It is in newsletter format 300 pages with 804 articles, each with a headline-like title, as well as 70 notes at the end of the book in the same format. Some longer articles are full page. Most pages have 3-5 articles. There are 28 articles of 1-2 pages and 2 articles of 3 pages. There are 243 photos and illustrations.

I wrote many articles about the past which are eerily resonant today, hence the title. Examples are an 1899 prediction that the Chinese will start to mass produce goods “not for their own use, but for us and at such ruinous prices that the labor market of the world will suffer a terrible blow,” (Made in China), virtually identical ads for cure-alls in 1903 and 2012 (Snake Oil), the stupid economy of 1896 with “Leak Through Economics” from Bryan’s Cross of Gold speech.That morally corrupt new music is old, shown by a series of quotes about the waltz in 1813, ragtime in 1902,  Stravinsky in 1913, swing in 1936, rock and roll in 1957, and Keith Richards dissing hip-hop in 2007 (All Shook Up). The Great Recession got you in a depression? It’s happened before, long before. Read about the Panic of 33 in ancient Rome. (Oeconomia est, O Asine!) While you’re visiting Rome you really should go down to Pompeii and read the ancient graffiti on the walls: “Chie, I hope your hemorrhoids rub together so much that they hurt worse than when they ever have before!” (The Handwriting on the Wall).

The book covers topics from A (Attention Winos) to Z (Zen and the Art of Canine Maintenance). Here is a small sample of the diverse topics in the book: an elephant who didn’t get a peanut because it was paid for with a lead slug flattening the offender with a stream of water (Never Cheat an Elephant), postmen accused of dressing like women if they removed their coats in 1901 (Shirtwaists are for Pantywaists), women accused of dressing like men if they wore bloomers while bicycling in 1896 (Bloomer War), counterfeiters who printed money while in prison in 1899 (Passing the Buck), a definitive account of Izzy and Moe, colorful prohibition agents and masters of disguise in the 1920’s (Izzy and Moe), the lowering of executive salaries after the Wall Street Scandal of 1905 (Less More Money Than You Could Ever Spend), airline barf bags with ads on them (Ad Nauseum), and Mr. Herbert Televox, a 1927 robot who answered the phone and who, when asked his favorite book at an appearance at the American Booksellers' Association convention in 1930, replied “Is Sex Necessary?” by James Thurber (Is Sex Necessary?). The article is accompanied by a wonderful photo of a woman hugging the protesting robot.

Now and Then Again has something for everyone. The book is like a newspaper: you don’t have to read it sequentially, so you won’t get bored. You can read what is interesting to you and skip what’s not. If measuring the speed of light by melting a chocolate bar in your microwave (Hot Chocolate) is too technical, read about selfie toasters on the same page (You’re Toast!). If the gold standard is too complicated (In Gold We Trust), skip a few pages and read about marijuana scented coins from Benin (The Smell of Money). It’s the perfect bathroom book (see below).

The book has many articles with cross-references to related articles. A customer’s father who enjoyed the newsletters left me a 1935 Fortune Magazine book after he died. In it was an article about DeBeers which inspired me to write a long complex article about colorful Cockney diamond magnate Barney Barnato who was bought out by DeBeers founder Cecil Rhodes in 1889 (The Largest Check Ever Written). When Barney’s nephew attended a dinner at the Savoy in London in 1898, a cancellation left an unlucky 13 guests at the table. Warned that the first to leave would die, he scoffed and left first. Two weeks later he was murdered by a blackmailer. The Savoy then had a three foot wooden black cat named Kaspar sit in on all parties of 13. (The Cat Who Came to Dinner.) In 1930, the Savoy Cocktail Book listed a Barney Barnato Cocktail that used a South African apéritif that went “defunct” until revived by a South African winery in 2014. (The Ghost Ingredient is Back!) All three articles reference each other so the reader can have a bit of fun jumping back and forth.

The articles on this blog are a small sample from Now and Then Again. Available on Amazon for $16.95 print, $9.95 Kindle and also as an ebook from itunes, Kobo, and Inktera for $9.95. Also from Tolino in Germany. It's fixed format so it's better on a tablet, laptop or computer.